It’s a vertical framing member which forms part of a wall or partition. Also called as wall studs, studs are a fundamental component of frame construction and are made of timber. However, steel studs are increasingly popular, particularly for non-load-bearing walls and firewalls.

It’s about the construction of walls and planes using cold-formed steel components. Lighter gauge metal studs are used in non-load bearing applications like as interior walls, half-walls, and partitions.

These type of studs are boards that function as framing elements in your home, supporting the walls. They’re spaced either 16 or 24 inches on center along the wall and run between the floor and ceiling. Drywall is attached to the edge of the studs.

Steel Stud: Dass Metal studs are made in a variety of flange widths to meet different applications. There are various sizes available but Dass Metal can meet any size requirements.

Wood Stud: Light structural lumber is mainly used in residential construction. It is milled from softwood trees that are sawn and machine-planed to standard dimensions (2×4″, 2×6″, 2×8″, etc.).

Steel-frame construction:
Metal wall studs, which are typically produced by steel, are usually intended for use in basement walls. They can also help design DIY partition walls or other parts of simple metal structures. Metal framing studs are used to support a non-load-bearing wall.

Wood-Frame construction:
Building construction in which exterior walls, load-bearing walls and partitions, floor and roof constructions, and their supports, are all built of wood.

Steel Stud is lighter by nature and takes up half the space because of its hollowed shape. This makes for easier transporting and making them easier to store in bulk and less difficult to maintain once they’re installed.

Wooden studs can be difficult to install. You’ll need a lot of tools, such as a table saw, a nailer, and traditional hammers and nails, in order to properly secure those studs in.

In the past, wood was the preferred choice of material for framing studs. Now, however, there’s a growing focus on steel studs.  According to the Steel Framing Alliance (SFA), approximately 40 percent of commercial buildings are constructed with metal studs.

Steel framing is easier to handle because the studs weigh a third less than wood and can be installed at 24 inches on center. Metal framing has gotten stronger as compared to wood.

Wood can twist and warp; metal will not. Wood also cord moisture, which can lead to mold growth and rot, while metal is immune.

Metal does rust, so install a vapor barrier or sill gasket between the bottom plate and the concrete floor.

Steel Studs are more economical than wood. That’s right; metal is cheaper! A lot of studs are now made from recycled materials, which cut down costs when compared to disposable wood.

Wood is more expensive than steel. Wood was considered cheap at one point, and even though some of the softer woods aren’t as expensive as hardwood, the comparison cost between wood and metal studs is significant.

Steel Buildings quicker and more convenient to build, and they are also cheaper and easier to maintain. On average a steel home costs between $50 and $65 per square foot, this is on average 30 percent cheaper than a traditional home. Unlike other homes, steel is most often thought of as a one-time cost.

As steel studs are made of organic material, therefore they have a longer life as compare to wood studs.

As we all know wood can easily damage by carpenter ants and termites, but steel does not affect by them. Moreover, wood burns and metal does not as metal studs are virtually fireproof.

There are some nuances to this area. Steel framing can cost three to fifteen percent more than wood studs, based on Steel Framing Alliance calculations, but metal studs offer cost advantages in other areas that can offset this price difference. Warranty callbacks are minimized because steel does not shrink, split or warp. Steel studs are more affordable than wood. That’s right; metal is cheaper!

Wood can warp and rot. If exposed to a lot of water or humidity, the wooden studs may be rendered useless. It’s harder to protect them during the wetter months of the year.On the other hand, Steel studs are impenetrable to moisture, steel studs work well in bathrooms and waterlog basements.

DASS METAL Studs provide more strength and durability. They have a longer lifespan and less corrosive. As we all know, how quickly the world is moving to metal studs from wood studs, so we are towards our customer satisfaction. Our metal products business is built on the same DASS philosophy of providing our customers the quality and service they deserve. Our Mission is to provide our customers with superior products, competitive pricing, and delivery quality and tested products. 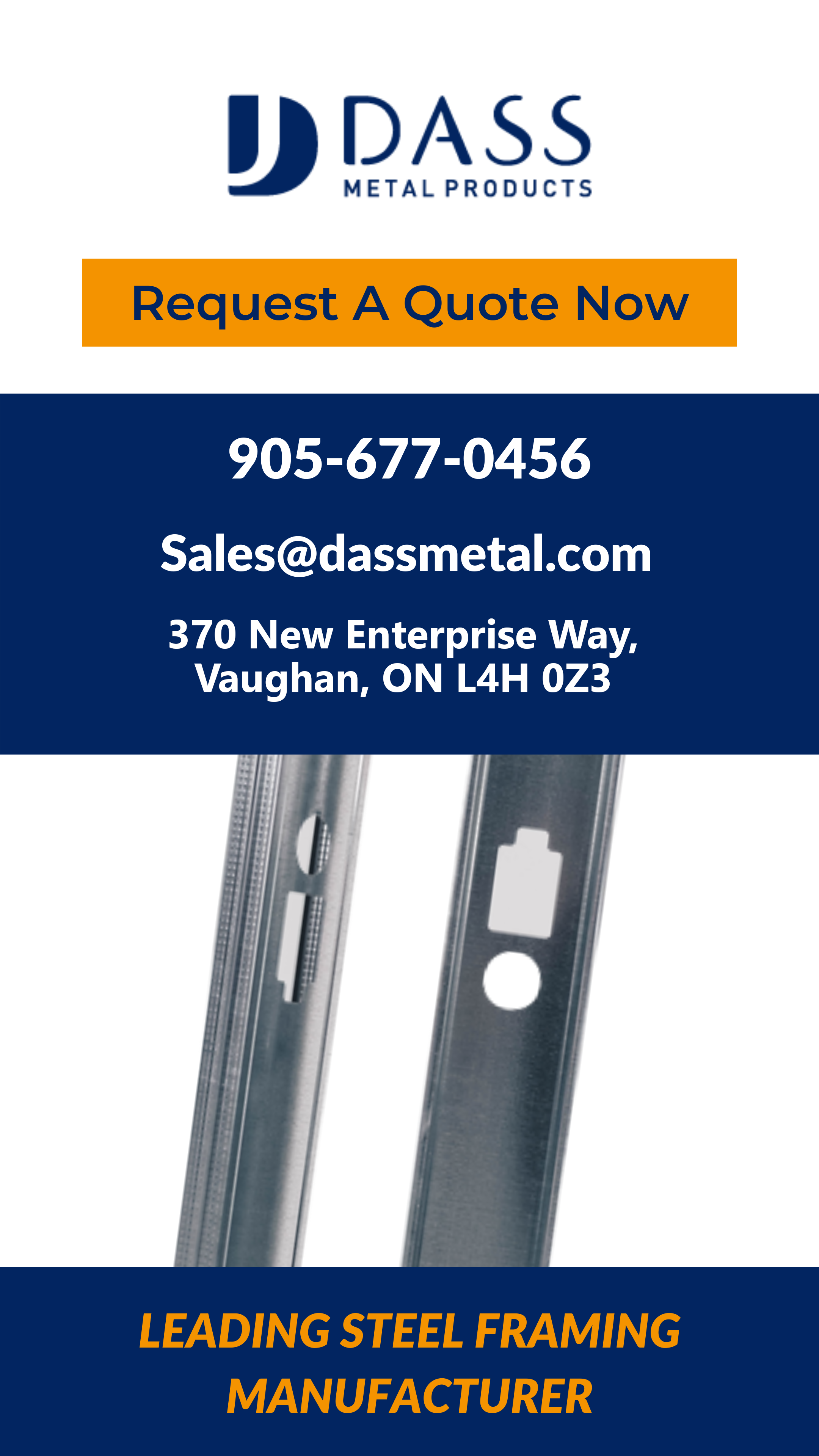